Ah, Singapore Night. I feel like this is one of those times where pictures would do a far better job than words, but seeing as how the pictures from the official photographer(s?) aren't out yet, I'll attempt to articulate how fantastic the night was.


Leading up to the night was a flurry of daily gym sessions and dieting for quite a few of us. One night, Dong, Vincent, me, and Khai must've been quite a sight at the gym, with the four of us lying in a row on our mats doing an abs routine together. I went on a five-day sugar ban five days before Singapore Night (because I didn't think I could last a whole 30 days like in the Buzzfeed video). It was excruciating because my housemates kept baking stuff and I attended this event after which there were heaps of Subway cookies left over, and I couldn't eat any of it! But anyway, I think all this preparation helped in getting me psyched up for the night. The morning of, I found out that pretty much everyone I value in my Med and Jane circles of friends would be attending, and I was so freaking happy.


It was an extra special night for the third year Med kids, because we'd just found out our fourth year clinical school allocations the day before. Some of us will be staying in Hobart, some are being exiled to Burnie (I kid) (kind of), and some, like me, will be going to Launnie. Singapore Night was therefore going to be a sort of farewell for us and for our non-Med friends. Luckily, we were having too much fun to be sad.


The night started off with a 40-minute ferry ride to Peppermint Bay. Once we'd entered the venue and gotten seated, there were a bunch of speeches and performances and things. I wasn't sure what was going on half the time since our table was at the back of the room, but I wasn't complaining because we were the second closest to the photo booth. We of course took advantage of this the moment it was announced that the photo booth was open, because why not? Our three-course dinner was served, the length of time between each course just the perfect amount to finish eating and then talk and mingle. I ended up sitting next to Dong, which was great because we got to sample both options of entrée and main between the two of us, and he finished all the food that I wasn't able to. There was a three-hour window for free flow alcohol for those who'd purchased drinks tickets...and we all know that free flow alcohol always comes with its repercussions, but that was something the poor staff had to deal with. Then there was some crowning of titles (Mr and Ms Singapore and the like), some dancing, and then we were shooed back on the ferry/party boat for the ride back to Brooke Street Pier.


I think I spent a lot of the night marvelling at how good everyone looked. I'm not even kidding, everyone looked good. It was just so, so nice to see my friends all dressed up and happy and having a good time together, with absolutely nothing marring the evening. I don't even know if this makes any sense, but I was just so proud of how attractive everyone looked, especially the girls with their nicely done makeup. Truth be told, I'd been kind of grumpy about the whole process: contacts and strapless bra and getting makeup right and bare legs/not enough layers in the cold and the awful monstrosity that is high heels (it's currently the day after, and the balls of my feet still hurt). It all felt worth it in the end, though, seeing how nice everyone looked and knowing that I looked just as nice. It makes my heart swell just thinking about it.

Of course, when you have a large group of good-looking people who made an effort to be good-looking for the night, they're going to be wanting to take a lot of photos. The lighting in the room wasn't very conducive for selfies, so we all attacked the photo booth. It wasn't just large group shots, either -- first was the third year Med kids, then our study group, then our mini OSCE practice group, then later an OCF group shot, then just the OCF guys, and then housemate pictures...and these were just the ones of people I knew. The poor photographer was swamped with apologetically obnoxious people wanting to take photo after photo, and finally Puk (the SSS vice president) had to step in and tell us to give the poor guy a break so he could eat his dinner.


I've got to hand it to the SSS (Singaporean Students Society, oops), they did a great job with the event. Something of that scale must've been a pain in the butt to plan and execute, but the evening went by without a hitch. Well done, guys! Thanks for an excellent night! #SG50SSS


Though it may not have felt like it at the time, it was a lovely farewell. I had a really great time with really great people, and I'm so glad that we were all there. If this is my last memory of a time where we were all together, then I am happy, because it was better than I ever could've imagined.


So much love for everyone. Non-Launnie people, I'm going to miss y'all so, so much next year! 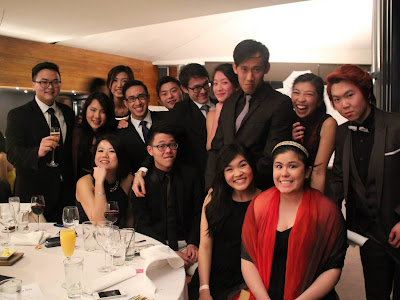 Missing a number of people, but it's the best we've got so far. Look at these dorks.
Photo credit: Daniel