Before I start, I have to be honest: The main reason I went for Sungha Jung's show on Sunday night was because I couldn't go for Bastille's the night before. I really, really, really love Bastille and was pretty sore about not being able to go due to familial duties, so I went for this instead. Don't get me wrong, I do love Sungha; I think he's amazing and have been subscribed to his YouTube channel for a good few years now. However, due to my being extremely sore about Bastille (I've refused to listen to any of their songs for a while now -- I can't), I viewed this show as a sort of consolation prize, which I regret. In any case, I'm glad I went, because it was pretty amazing. 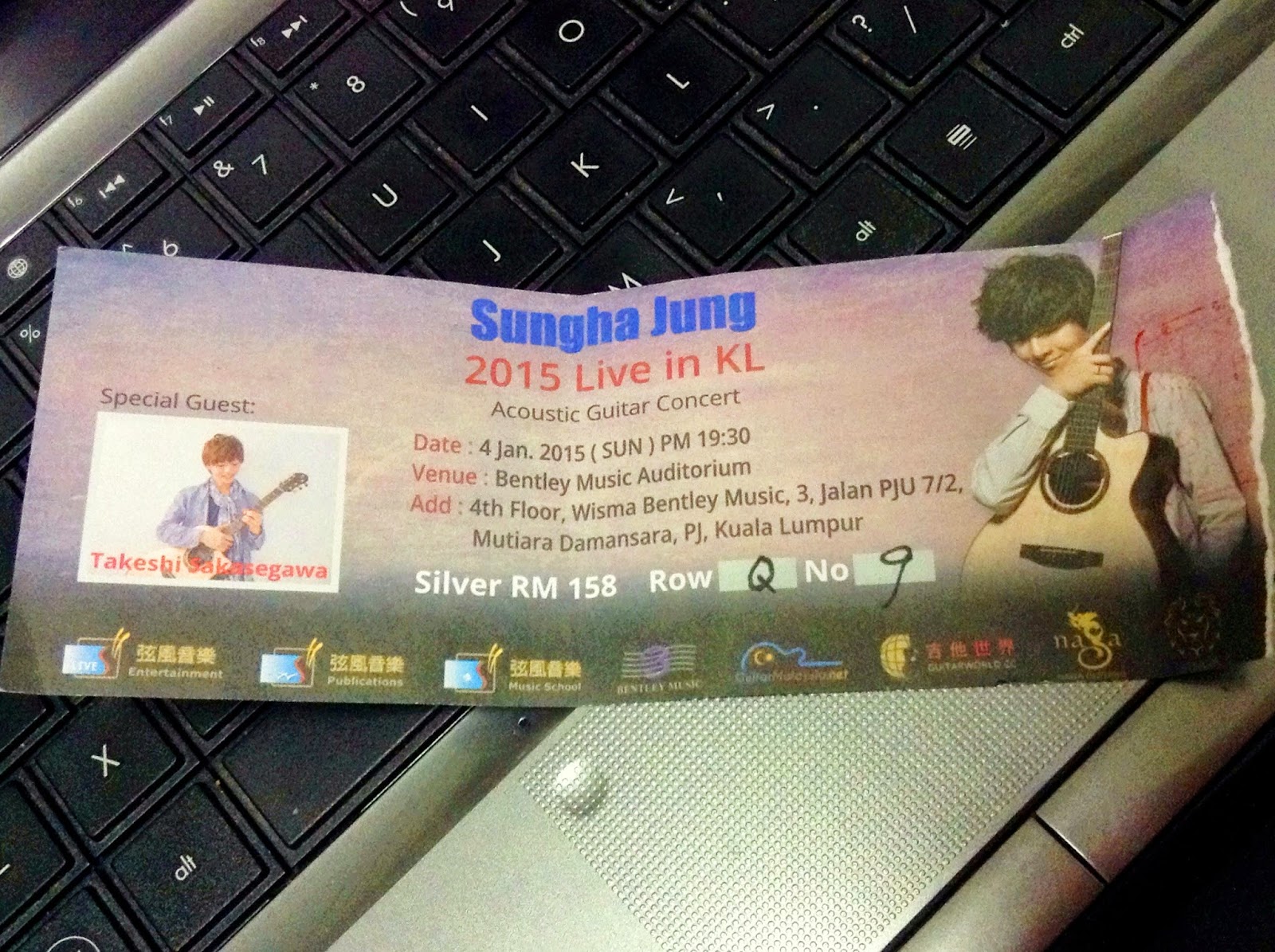 
The show was due to start at 7.30pm, which I took to mean around 7.40pm, since this was Malaysia. Nevertheless, I got to Bentley auditorium early and found my seat in the silver zone. Behind me were the student ticket seats (which had sold out by the time I tried to purchase them), and in front of me were the gold and VIP zones seats. The auditorium isn't very big, and the heads of the people in front of me were miraculously positioned such that I could see the stage perfectly, so I was very happy with my seat. To my surprise, the lights dimmed before 7.30pm, and Andy the emcee cum organiser came onstage to start the show.

The opening act was Takeshi Sakasegawa from Japan. He was amazing. The most I do on my acoustic guitar is strum, so I don't know enough guitar jargon to describe the stuff he did, but it was so, so good. He played only two songs, Parting Morning (video below) and Sakura. Both of them looked technically difficult, but he performed them flawlessly. I preferred Parting Morning -- he'd told us it was his own original composition and got really into the song as he played, and there was a really lovely harmonics bit that made me smile as wide as he did. He just seemed so happy to be performing! When he spoke to us, he seemed really earnest and warm, and I decided that I liked him. I feel like he deserved a lot more applause than he got, but then we were a pretty quiet audience.


Then came Sungha. As I expected, he looked exactly as he did in his videos. His appearance was a little jarring initially -- his frame was slender and lanky, his neck and fingers were noticably long, and he appeared to be made entirely out of angles. Once he started playing, though, all that went out the window and I could concentrate on nothing else.

He started on his first song immediately, saving the hellos for after. His first set was a few of his original songs on the acoustic guitar, after which there was a fifteen-minute intermission. When he returned onstage, he picked up the ukulele and played Gotye's Somebody That I Used to Know and Taeyang's Eyes, Nose, Lips. He switched back to the guitar then, playing more original songs and some covers: Adam Levine's Lost Stars, Yiruma's River Flows In You, and Lee Byung Woo's Bird as his final song.


He was just...awe-inspiring. Really. I think he did make a couple mistakes towards the start of the show, but recovered smoothly each time. Every song was just this tidal wave of music and emotion; he merged smoothly from playing delicate-sounding harmonics to slapping the strings with precise intensity, leaving me breathless. Mostly, he played original songs, which was good because he was obviously more into those than the cover songs. The only original song I knew was Gravity, as I hadn't listened to most of his others (I can't bring myself to give songs that have ambiguous single-word titles a chance). However, three that stood out for me were Sprint, Flaming (see what I mean?), and The Milky Way.

It was clear, though, that the crowd seemed to respond more to his cover songs, especially the pop songs. This wasn't quite the case for me, since I kind of hate Somebody That I Used to Know and hadn't actually listened to the Adam Levine or Taeyang songs. But River Flows In You was something else. It was probably the technically easiest song he performed, but I'd be lying if I said I didn't have tears in my eyes as he played -- it was so, so beautiful. I watched the YouTube video of his acoustic guitar cover of it, and it really doesn't compare. To be fair, though, it's pretty old. He has (in chronological order) more recent piano, guitarlele, classical guitar, and harp ukulele covers -- pretty much a new instrument every year since 2010!


Anyway, back to the show. He spoke to us a bit, and I noticed his English had improved; there was less hesitation before speaking and his pronunciation was better. However, there wasn't much audience interaction as he wasn't very chatty and we were a regretably quiet bunch. I don't blame him, though. I mean, if you stuck me in China and made me try to interact with an audience in Mandarin, I'd be pretty quiet too. That's not to say he didn't try, though! An example, while he was tuning his guitar: "How are you doing? [silence] Good? [a few murmurs] No?" We were horribly, horribly quiet, and I felt awful.

Speaking of him tuning his guitar, that's one gripe I have about the show. He stopped to tune his guitar before almost every song. Surely not every song had a different tuning! Why didn't he group together the songs that had the same tunings? Maybe those were meant to be crowd interaction/song introduction times. Whatever it was, it was weird and got a bit annoying after the first few times. Also, the venue's flashing coloured lights were a bit distracting at times, but that stopped after a while, thank goodness.

After his final song, Sungha and Takeshi returned to the stage to do a duet cover of Coldplay's Viva La Vida, and it was the best part of the night. Sungha, who'd been pretty grave onstage so far (no thanks to us and our apparent lack of enthusiasm!), was smiling and looked far more relaxed; Takeshi was positively beaming. The two seemed to feed off each other's good vibes and looked like they were having such a good time onstage! It was such a lovely performance, and I was sorry when it ended. There was a gold zone ticket lucky draw then, and a girl won a guitar and got a picture with and side hug from Sungha. And that was it.


When I got outside, there was a massively long queue, which surprised me. I guess it just goes to show my lack of concert-going, because I hadn't realised there would be a signing after the show, and had therefore been a bit puzzled at the number of people who'd brought along their guitars and ukuleles. I didn't have an album or an instrument, so I just stuck around to watch (and sneakily take pictures). (I felt like a creep.) (I'm sorry, Sungha.) He seemed really sweet and polite, looking up and smiling at each person after signing their item. One girl held out her hand for a high-five, and he reached up to gently bring his long-fingered hand to hers, more Tarzan-meets-Jane than high-five. It was really cute. Takeshi was brought out to join him a bit later, and there was some unhappy muttering from people who'd already gotten their stuff signed. It got harder and harder to sneak photos, so I figured I should stop being a creep and leave Bentley.

I actually really like Bentley auditorium. It's a great venue because it's both large enough to accommodate a couple hundred people and small enough for the show to feel somewhat intimate. The last time I was in there, it was for David Choi's show (which was also the last show I'd been for). Watching Sungha on the very same stage, I got the same strange feeling as before; it was surreal to see someone I'd only ever seen on a computer screen walking and talking and breathing before my very eyes. Very often with artists and celebrities whom we only see onscreen, we forget that all they really are -- underneath all the makeup and marketing -- is human. It's nice to be reminded that despite all their fame and talent, we're all pretty much the same (if only on the most basic level). 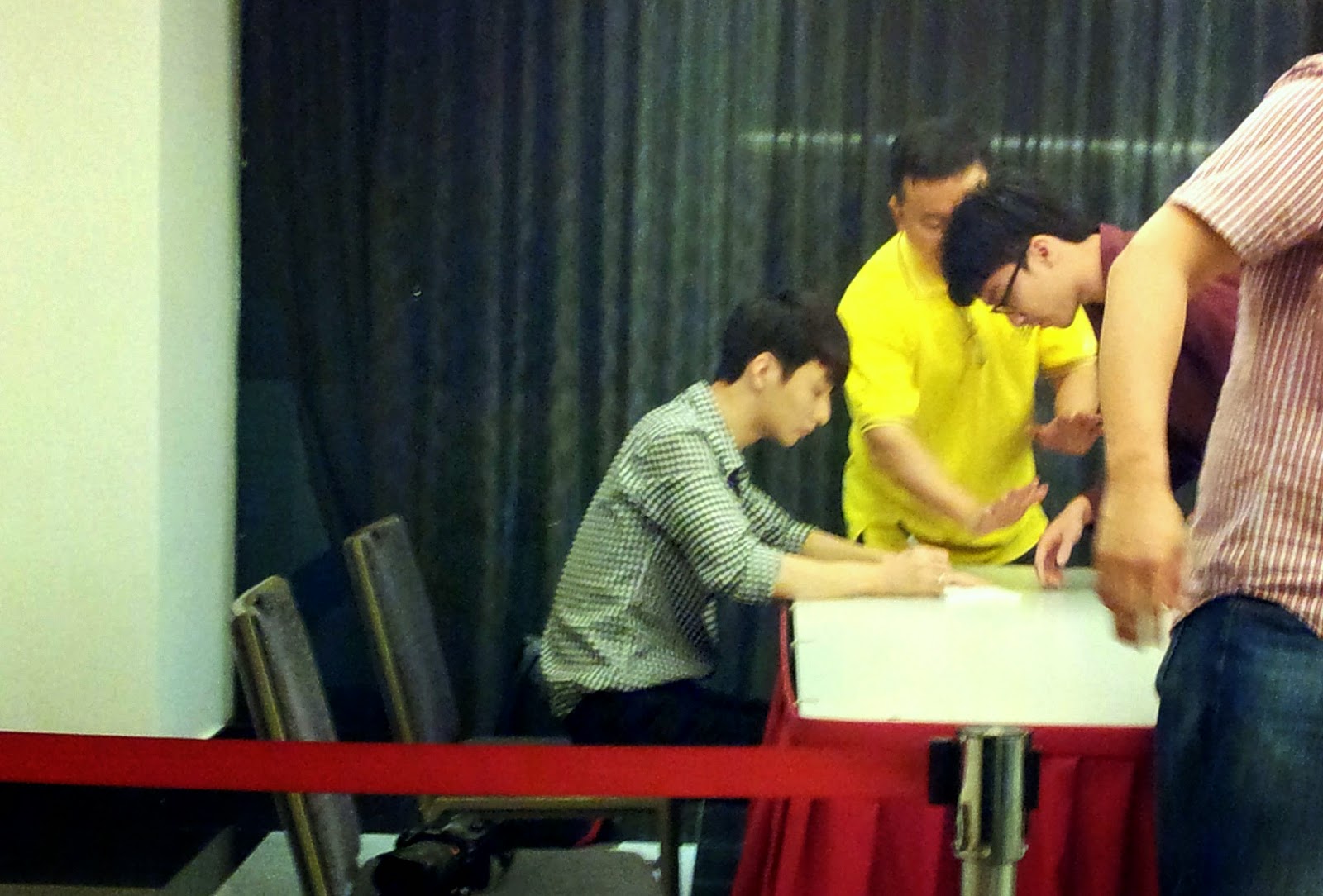 
It was a really good show, and my only regret was that we were so quiet. Both Takeshi and Sungha were amazing, and should've gotten way more applause than they did. Watching them perform live was such a great experience, and I'm thankful for it. Though I managed to slip through the fingers of post-concert depression this time, doing research for this post had me watching numerous Takeshi Sakasegawa and Sungha Jung videos on YouTube, and I will say this:

As good as the YouTube videos are, nothing in the world beats the live experience of the guitarists' intensity; emotions; and pure, incredible, freaking brilliant talent.
Posted by Hui Jan at 6:26 AM