We might start off with what cancer is and what it does. You see, your body is made out of many, many cells which are constantly dying as they grow old. Cells can also be made to die if there is something wrong with them. However, your body doesn't go into deficit and shrink because cells are also constantly dividing in order to replace cells that have died or been made to die. (Don't worry.)


In about every one in three people, though, a rogue little whippersnapper of a cell comes along. (Now you can worry.) There is something wrong with it, but it refuses to die -- on the contrary, it continues to divide and multiply swiftly, forming a lump that consists of identical cronies. It multiplies more and more, and the lump grows larger and larger, invading the innocent, normal tissue around it. ('Tissue' refers to a bunch of cells, not that of the paper variety.) It pushes so aggressively into their space that the normal tissue is unable to carry out its function. This big bully, growing as quickly as it is, elbows its way into the blood and nutrient supply of the surrounding tissue, extorting the things the tissue needs to live; in time, the surrounding tissue might even die. 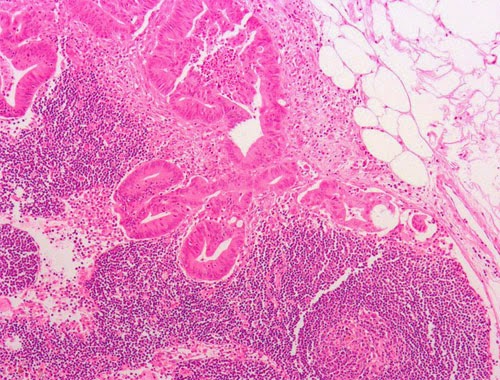 Metastases in the lymph node under a light microscope. Apparently. I can't tell.
(From Cancer Network)


But that's not all! Sometimes, this grim growth decides to mark other places in the body as its own, and metastasises -- little chunks of it break off and are carried elsewhere by the blood or lymph, where they lodge and begin the whole process all over again. More and more tissues are being invaded and destroyed, so if you weren't pretty ill before, you probably are now.


Thankfully, there are treatments for cancer today, one of which is chemotherapy. The principle behind it is using toxic substances to kill rapidly-diving (one of the hallmarks of cancer) cells. Unfortunately, there are other cells in your body that divide pretty rapidly too, such as those of the hair follicles and bone marrow, and those get targeted too. Hair follicles and bone marrow produce hair and white blood cells respectively, so some of the side effects of chemo are hair loss and suppressed immunity (white blood cells help fight off infections). It goes without being said that chemo is tough, and it takes a lot out of you.


That's where AXA AFFIN comes in. In an effort to spread awareness about early cancer detection and treatment, they have generously offered to pay for a day of day care usage for one cancer patient within the directory of the National Cancer Society of Malaysia for every blogger who blogs about cancer with a link to the AXA 110CancerCare site. The greater the number of participating bloggers, the greater the number of patients who get funded. If you've got a blog and some free time on your hands (or are procrastinating like I am), consider putting both to good use and joining this worthy cause! This only runs till the end of March, so get amongst it quick.


Basically, cancer sucks. A lot. So if you're able to help make it suck a little less for people who have it, why not, right? Hopefully this post helps in some way and wasn't too sciencey for the non-sciencey people out there. Thanks for reading (and, hopefully, writing)!
Posted by Hui Jan at 10:46 PM