Bright and early the next day, Sze Li and I got up to go to the beach for a jog. Before I say anything else, let me just tell you that unless you are wearing proper shoes, this is an overly romanticised idea. Slogging through sand is hard work, and there's no way you can jog barefoot on the wetter, more compact sand that's littered with seashells and little rocks.We gave up after a bit, but we did cover the entire length of the beach with a combination of jogging and walking. 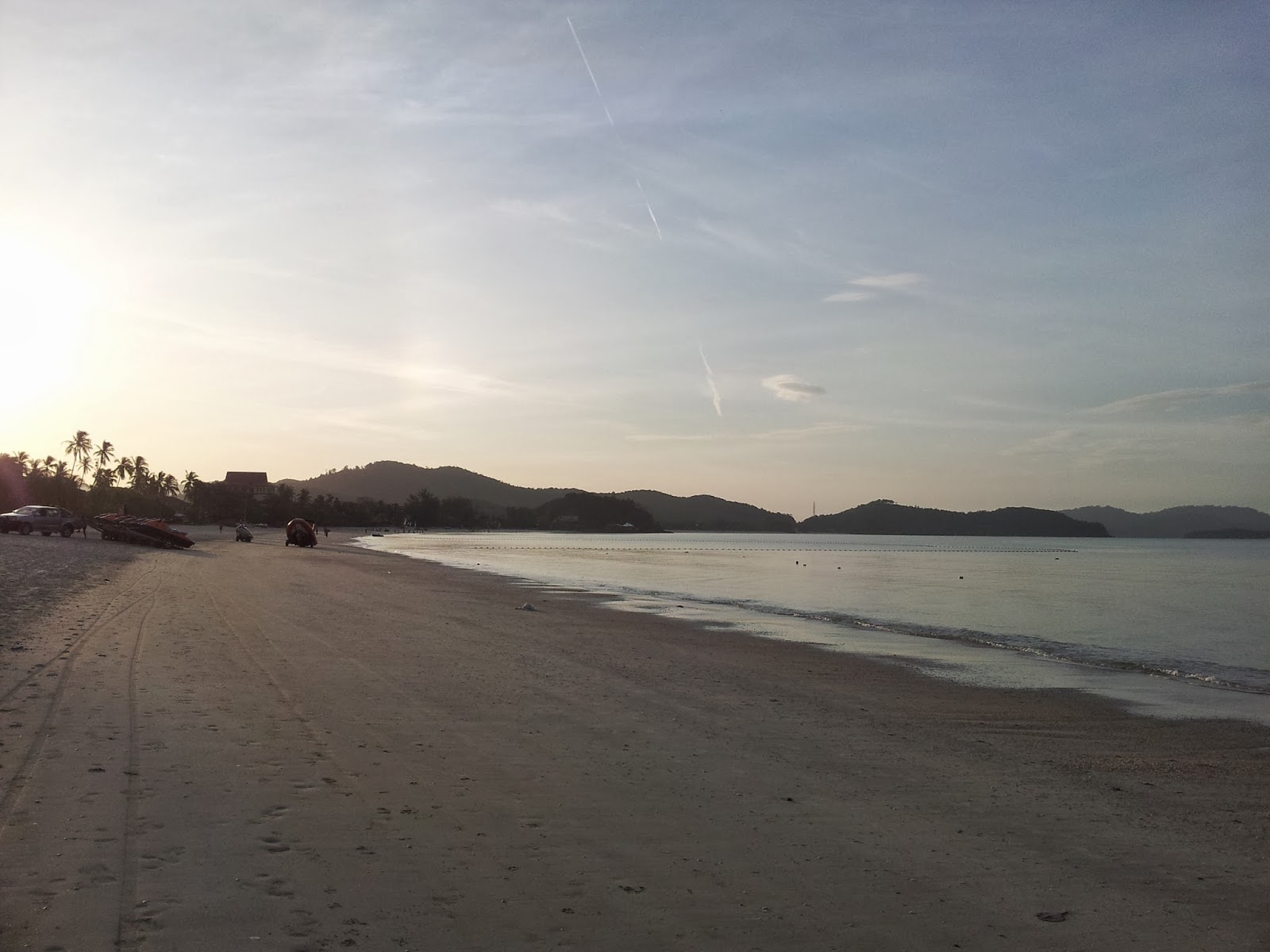 
There were a few other people jogging as well, all of them in running shoes. Besides them and the people setting up watersports equipment, the beach was fairly empty. I remember, as I was taking photos, this one guy strode past me, and I had to try not to stare. He had on a white tunic-like top and a sarong, and his hair came down to his waist; it fluttered gently in the wind as he navigated the sand and small rocks with practised ease. His skin was dark and his eyes somewhat Oriental, but I couldn't tell you what race he was. I don't know what it was, but he just looked to me to be very out of place on a beach, as though we were on the set of Lost, marooned on a desert island. He seemed perfectly comfortable, though.


Once we were tired of attempting to exercise but taking photos instead, we went back to the hotel to have our free breakfast. Every morning, there was a spread of fried noodles, fried rice, bread/toast with jam, cornflakes, and fruit. When we were done, we woke Timothy up, and the three of us headed to the beach together. 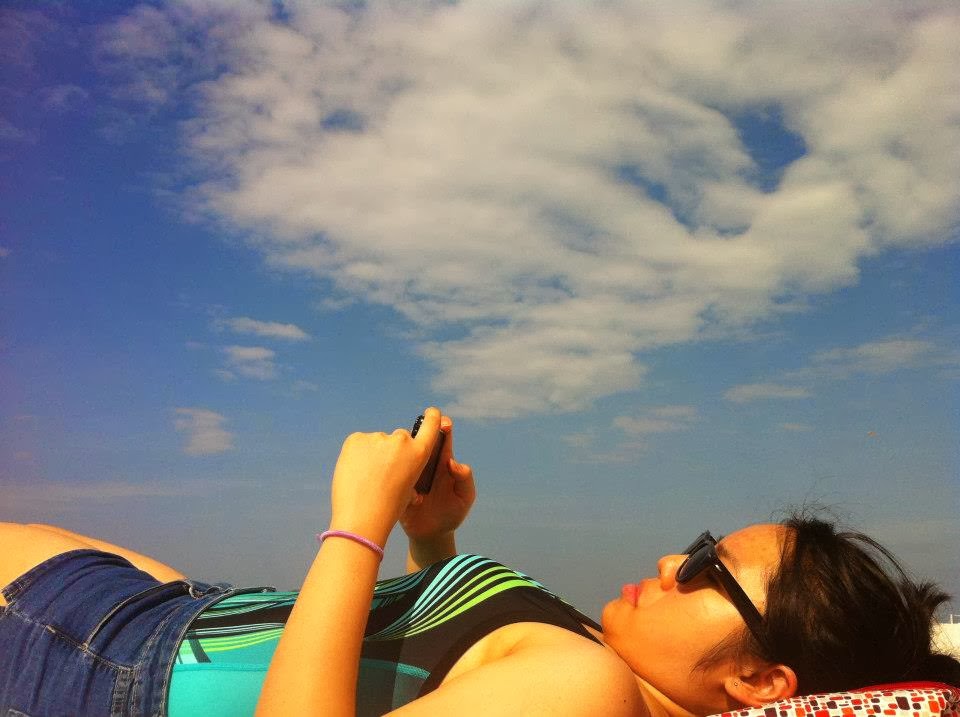 
Okay, look: tans are great and all, but sunbathing isn't. I don't understand how people can just lie there for ages under the hot sun; I just get bored and uncomfortable because there's nothing to distract me from the heat. You can't even fall asleep because you'd risk burning despite having applied sunblock. Sprawled out on the beach were sunbathers whose skin was a horrible brown-red colour, and all I could think about was solar keratosis and skin cancer. Anyway, after about ten minutes of attempting to sunbathe, I gave up and went to have a swim in the sea. And take photos, of course.


The beach was beautiful now that the sun was out -- the sky was blue, the sea was bluer, and the sand was almost white in the bright light. The water was just the right temperature and the waves weren't too strong, so it was perfect for a swim. Before diving in, I waded out to stand waist-deep in the water and just stared at the sea, marvelling at how infinite it looked: blue as far as the eye could see, and so beautiful. Being in the course I'm in at uni, I'm usually marvelling at the intricacy of God's creations -- the tiny, minute details of the human body that are essential to its function. It was a refreshing change to take a step back and be awestruck by something so big instead. It's also a nice reminder of how impossibly big God is! 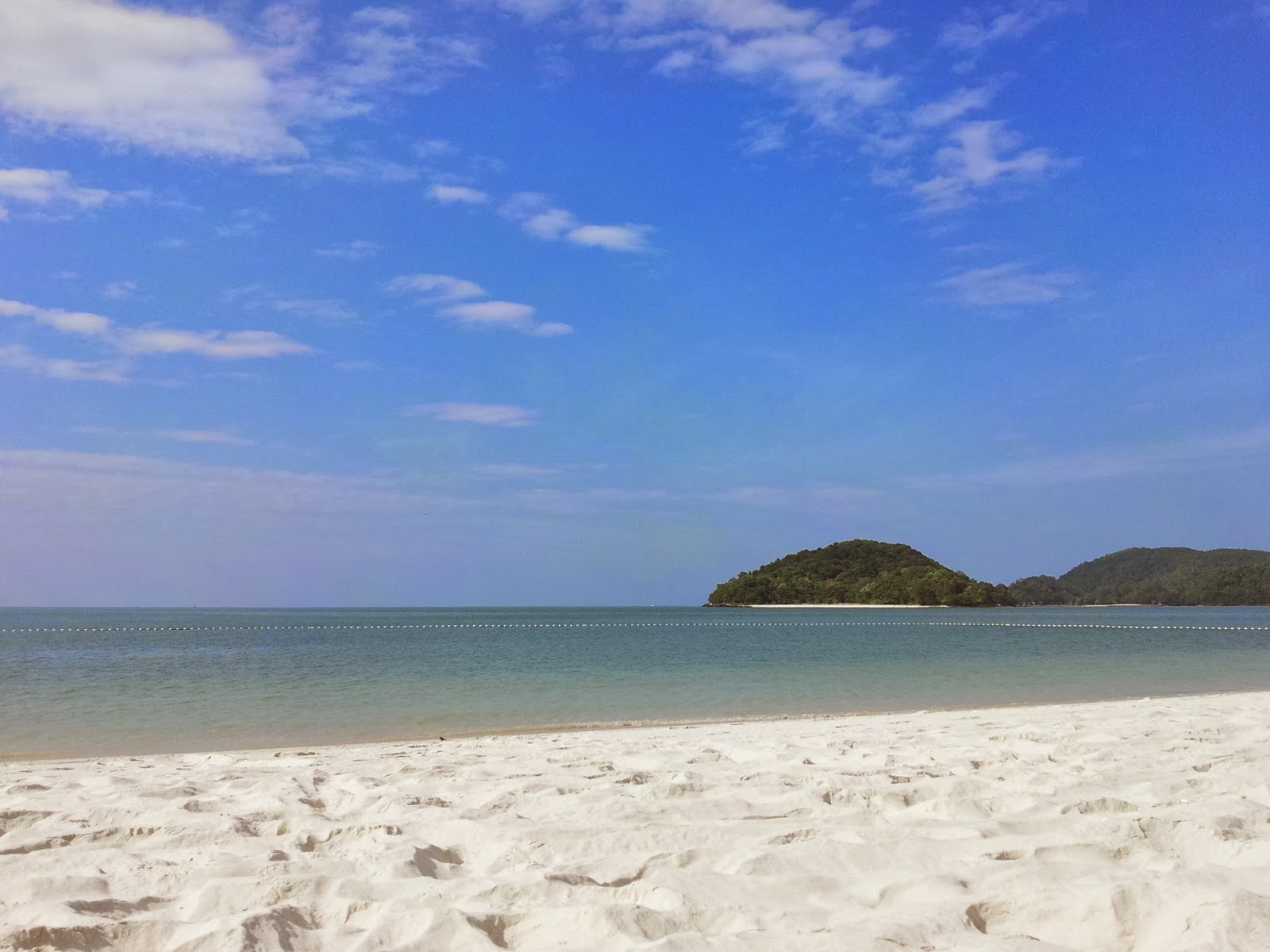 
When I researched the Laman Padi online, it said that the entrance fee was RM2. There was no one there when we got there, however, so we just walked right in. The paddy field was really nice. There were squares and squares of paddy plants that looked much prettier than the ugly green squares we'd paint in Pendidikan Seni (Art) classes. There were a few little huts scattered around the field, and we sat in one for a bit, enjoying the cool breeze. It was very peaceful and kampung-like (village-like), and it was a while before we left to enter the museum. 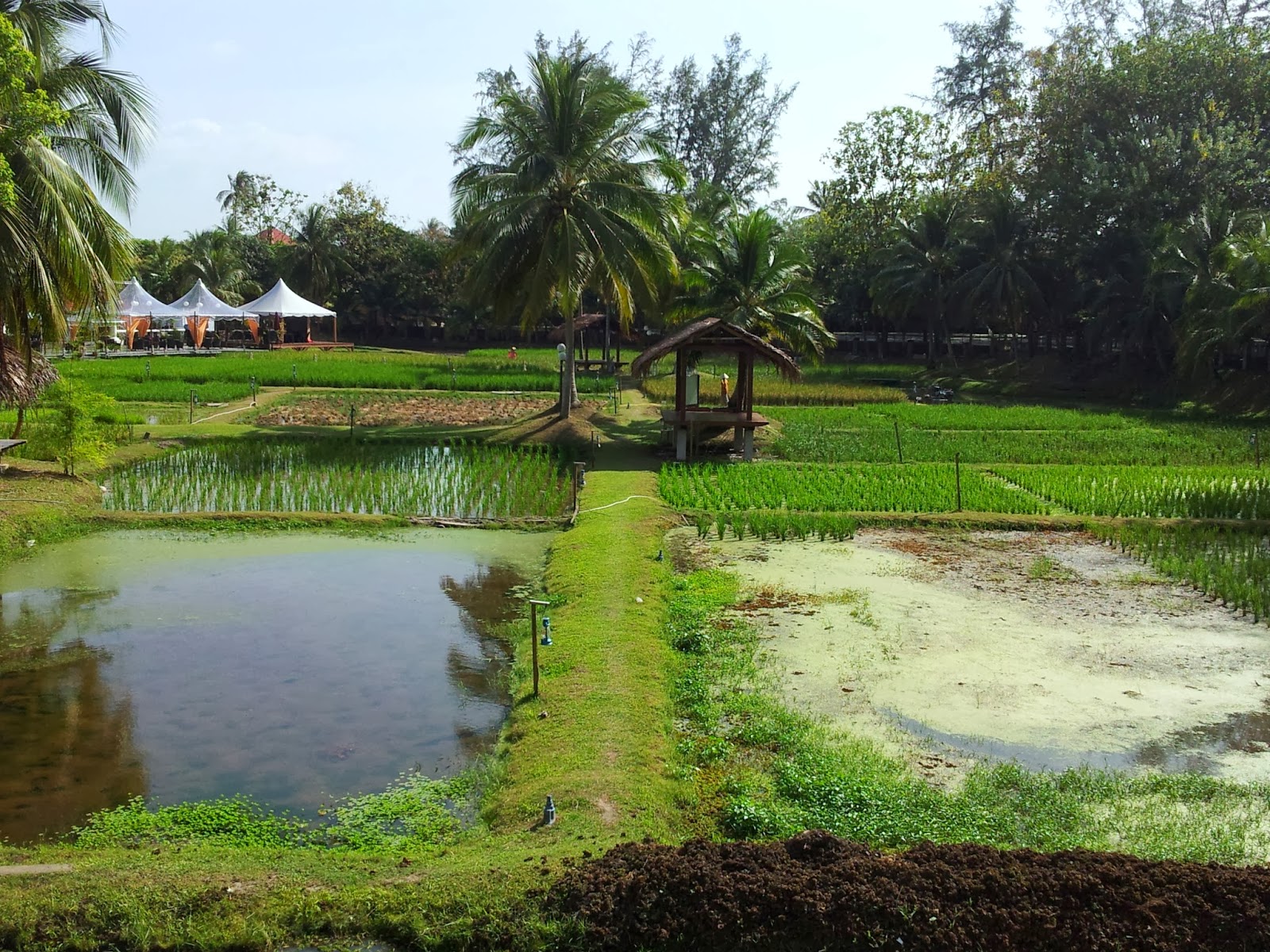 Sitting in a rice field is surprisingly pleasant.


The museum itself wasn't particularly interesting as none of us were particularly interested in paddy or old farming tools. I tried to read all the little placards and stuff, but the other two didn't, so they breezed right through. They called me from the exit when I was only halfway through, and I realised I was alone in an area of the museum that had mannequins on display, which felt really creepy, and to be honest it wasn't that interesting anyway so I high-tailed it out of there.


To kill time before dinner, we went shopping along Jalan Pantai Cenang, walking nearly its entire length. I think only Timothy bought something in the end. I was sorely tempted by some dresses, but you couldn't try them on, and I wasn't going to pay RM35 for a dress that made me look like a potato and that my sister wouldn't wear, so I ended up doing the sensible thing and putting them back on the racks. The money, I consoled myself, would be better spent elsewhere.


We looked up and down for a new, cheap place to have dinner, but we were unable to find one. Nasi Kandar Tomato again it was! It was lucky that the three of us like spicy, Malay/mamak food, because that was basically our diet throughout the entire trip. Once we were done, we headed to the beach and bars to catch the sunset. 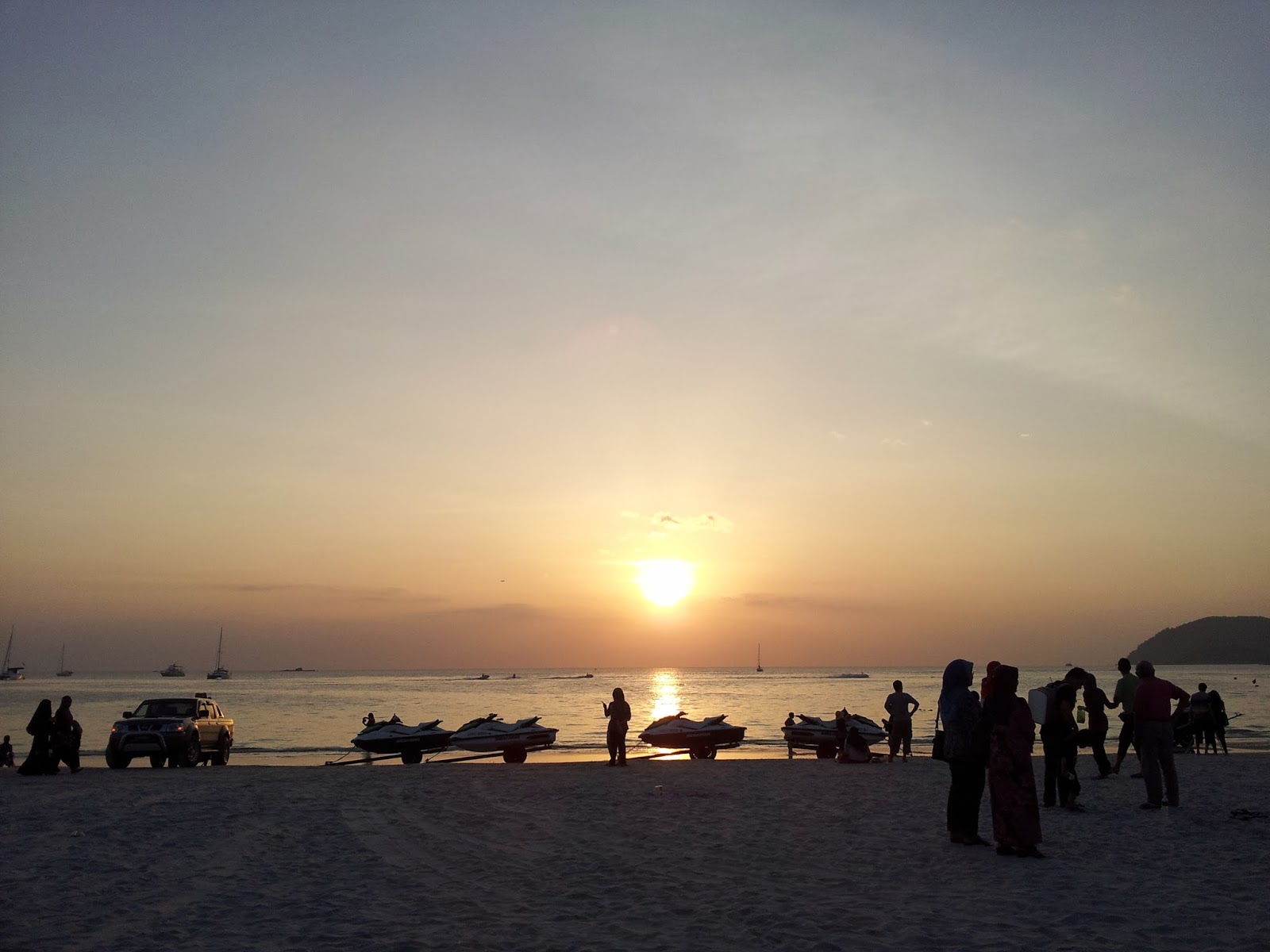 It sinks so quickly once it's near the horizon! A timelapse would've been beautiful.


Chiang Mai wasn't open, despite the owner having told us the night before that it would be. To be fair, though, it was still fairly early (7pm?) and there was still watersports stuff scattered around the sand where the little tables of Chiang Mai had been set up the night before. We managed to get a table at Rafii's instead, where I had a Malibu on the rocks for the first time. The lady at Rafii's was super gregarious and friendly, so we decided to stay. The three of us ended up spending the rest of the night there, having some HTHTs (or D&Ms, depending where you're from) over beer.


On the way back, we stopped by Ruang Bar since there was a band playing and Timothy's friend had told him the cocktails there were good. Again, RM10 cocktails! I ordered a daiquiri, which was pretty potent and apparently not my thing, so I swapped with Timothy, who was having a One Love. The thing about Ruang is, it's this tiny little stall by the side of the street, so there's actually very little space to sit. Luckily, this is Malaysia, so most people were sitting by the kaki lima (walkway) in front of a closed store beside Ruang. 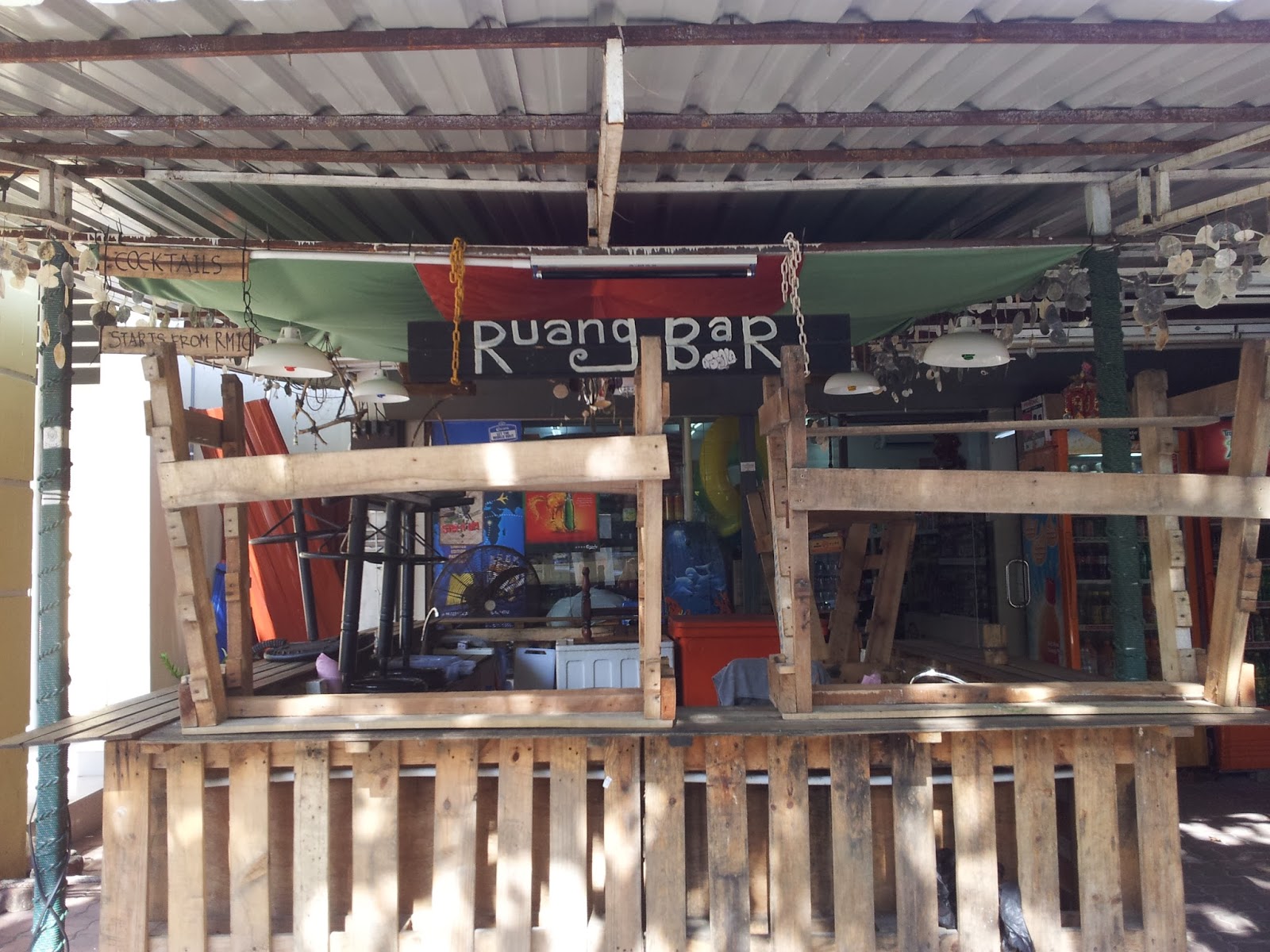 Photo taken earlier in the day. That is literally it.


As we did the same, watching the band, who would turn up but our long-haired, Lost friend from the beach! Sze Li and I decided he was quite cute, and suddenly the band didn't seem quite so interesting anymore. We nicknamed him Toshi, because he looked a little like a samurai. He stood beside the band, obviously friends with them, smiling and swinging what looked like two little balls connected by a piece of string in time to the music.There were other people enjoying the music too, like this tall, slim, possibly European lady who looked like she could've been a mom, but was an amazing dancer; they were subtle movements, but you could definitely tell that those hips didn't lie. There was also the skinny lady next to her with the hair extensions, who was easily the most serious, intense (and also the worst) dancer there.


The band finished their last song and begin to pack up, so we left. It had been an interesting half hour or so of people-watching. We headed back to the hotel to go to bed before an early start the next day, for which I was excited -- we were going exploring!
Posted by Hui Jan at 7:03 AM