There's this niggling at the back of my mind to blog about the Terry Fox Run, but there isn't really much to say about it. For the sake of posterity, I'll just cobble something together here, I guess. (Not the best way to start a blog post, but it's sort of nice because it reminds me that I blog for myself, mainly, not anyone else.)


One day, my mom and I were headed somewhere in her car, listening to Lite.fm. Yasmin Yusuff was talking to some of the organisers of this year's Terry Fox Run KL, which, as we learned, would be on the 1st of December. And so, since we had nothing on that day, my mom, sister, and I decided to go. 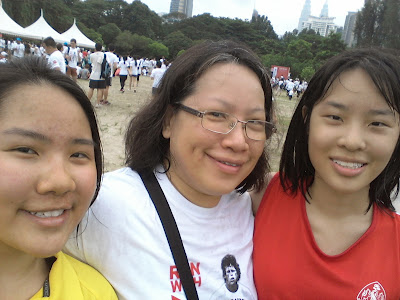 Me, my mother, and my sister post-run.


It's a bit embarrassing, really. You have all these people going, "I'm ran in memory of my [relative/friend]" or "I ran for those who can't" or "I ran because I'm a cancer survivor" or "I ran because I find Terry Fox's story inspiring", and here I am basically saying "I ran because I had nothing better to do that day and also because it was free, although I did buy the T-shirt".


This year's T-shirt was white, and I remember being awed by the sea of white on the green grass of Taman Tasik Titiwangsa. There was everyone from tiny kiddos in strollers to seasoned athlete-looking types who were doing warmup laps before the run -- the turnout was great! In fact, there were so many people that when the run officially started, it was a fair few minutes before we managed to actually get past the starting line (my mom commented that it looked like we were all getting sucked into a vacuum, or something along those lines). It was quite a while before there was actually space to run, and I remember thinking that it was a good thing the T-shirts weren't black or we'd all look like a giant funeral procession. Finally, taking cues from people passing me, I began to jog, weaving through the crowd. 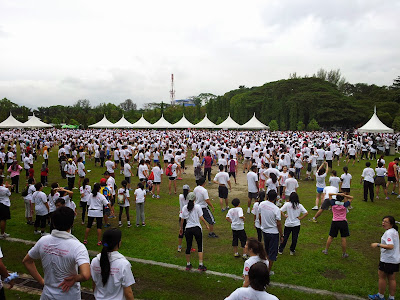 
If you know me at all, you'd know that I'm super lazy and I hate exercise; since stopping Insanity, on a scale from one to ten, my fitness level's plummeted to, like, negative two (while my weight has gone in the opposite direction). To take my mind off the fact that my lungs and heart and legs and everything felt like they were going to give out, I put in my earbuds and listened to Bastille throughout the (approximately) 6km run. Pro: Listening to Pompeii surrounded by people running/walking in the same direction was pretty epic and made me feel like I was in a movie...or a music video, at the very least. Con: This may have caused me to miss out on the a capella group somewhere along the route. Oh well.


The other thing that kept me going was this voice at the back of my head: "You think this is hard? Yeah, I bet chemo is harder!" I wondered how many people running were cancer survivors. There were special red T-shirts you could claim for free if you were, but I didn't see anyone wearing them. I guess there wouldn't be very many people who'd want to broadcast that to the world -- too many questions. I told a friend of mine about the T-shirts, and they asked the same thing I'd been wondering: "How would you prove you were a cancer survivor? Medical records? But those are private!" I still wonder how they handled that.


After the run, they were handing out free water and chocolate or blueberry cream-filled buns. There was also the much-anticipated Milo truck, with an incredibly long queue and, from what I heard, quite a number of queue-jumpers. We left then, so I don't know if anything interesting happened after. 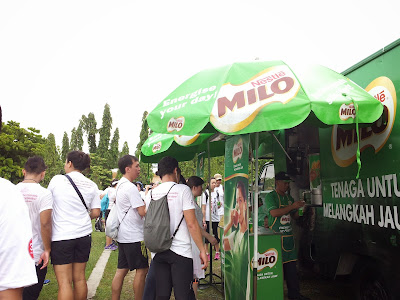 
All in all, it was a good experience, I guess. It was my first marathon-like event, a great lead-up to The Color Run next year! It's coming to Hobart, and I'm well excited. Hopefully it's a) not during our exams and b) when I'm actually in Hobart! It sounds and looks super fun -- who wouldn't want to be covered in colours from head to toe? I'm looking forward to being a yellow-bellied Smurf who's red in the face and green with envy!
Posted by Hui Jan at 7:16 PM