Midnight Memories: A song-by-song review of One Direction's new album 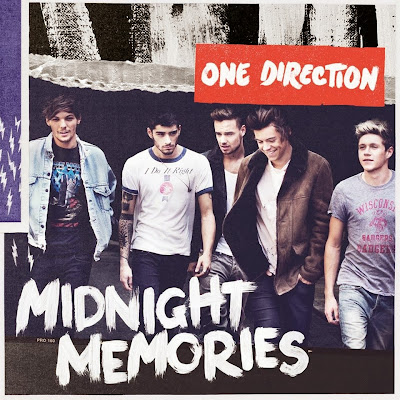 Yes, okay, I agree: the opening chords do sound like those of The Who's Baba O'Riley. No, this does not make me happy. But you know what does make me happy? The music video for this song. Liam and Harry especially were fantastic, and the dumb dance at the end makes me grin so widely it hurts. The song itself has stupid lyrics, but it's so darn catchy and some parts sound so epic that I can't help but like it. (Also, something some people don't realise is it's not meant to be the 'best song ever' -- they're actually referring to another song!)


Story of My Life

I actually like this song quite a bit; the chorus makes me think of fast-motion sunrises in deserts they show on the Discovery Channel. 1D doesn't have very many slow songs, which is a pity because slow songs showcase their voices nicely. This is another single with a music video out, which I really, really like. It doesn't fit the lyrics, but it's a really nicely done music video, which I think even non-fans would appreciate.

The minute this started, I thought Oh no, melodramatic pop song. I wasn't wrong. Pleasant enough; poppy but not annoying. All their fans named Diana are probably playing this song to death.

Loving the combination of Harry's voice and electric guitars, except for the fact that the chords in the chorus sound almost exactly like Beverly Hills by Weezer. It's a very catchy song, and I bet it'll be great at shows, but I cannot get over the Beverly Hills thing. (Side note: I just realised that Beverly Hills was released eight years ago. Wow.)

The second Niall sang the first line -- 'I figured it out' -- I started screaming in my head 'THIS IS THE SONG!' Liam got a tattoo of it, and it was everyone's first 'preview' of the album. It's sadly sweet (sweetly sad?) and has a certainly rawness to it, so I was surprised to find it was one of the three songs on the album that none of the boys had a part in writing. (Haterz, don't be mean, I know what you're thinking; that can't be the only reason it's a pretty good song!)


Don't Forget Where You Belong

Definitely one of my favourite songs on the album. It was co-written by Tom Fletcher, so this is hardly surprising (I've liked every song he's written for them). Pretty much every artiste who makes it big releases a song about home and how they miss it, and this is 1D's -- big, open-sounding, and optimistic, the kind of song that you can already see a tour life music video for in your head.

I don't know what to say about this song, because I honestly don't have an opinion on it. It's kind of really unremarkable, and the lyrics are a bit cliche.

I think this song has banjo in it, which is a really strange thought, but it works! It's a catchy song with a potential sing-along bit at the bridge, so it'll probably be great at concerts. The more I listen to it, the more I like it. I just wish they'd named it something else; 'Happily' is a really weird song title.

I swear they just got lazier and lazier with the song titles. Anyway, in this song, they used autotune for Niall's part, which is not okay in my eyes (ears?). I found it a little strange that they picked this to be on the album, because it doesn't seem to be within most of their vocal ranges -- Zayn sings practically the entire chorus. Then I saw that Ryan Tedder (of OneRepublic, well-known for his falsetto) cowrote and produced the song, and it all made sense. It actually sounds like a OneRepublic song, really.

Nice electric guitar work, but I feel that it drowns them out in the chorus. To be honest, this song leaves a bad taste in my mouth. Like many of their songs, it's directed at a girl, only they're not referring to her as a girl, no; instead, they are calling her 'little black dress' (Little black dress, did you come on your own? | It's too late, it's too late, it's too late to go home). Gross. Fun fact: this song was co-written by Teddy Geiger. Remember him? (Warning: extreme nostalgia.)

I really like this song, it's another one of my favourites. Sure, it's a little bit cheesy, but who (besides the lactose intolerant and vegans) doesn't like a bit of cheese, right? The chorus is really good; for some reason, when I try to think of a word to describe it, 'American' comes to mind. I'd love to hear them do an acoustic version of this.

I couldn't decide if this was a happy song or a sad song (I'm not sure if they could either). Googling and having a read of the lyrics told me that it's the latter. It's a pretty good song, but I wish they'd toned down the drums a little. Fun fact: this song was co-written by Gary Lightbody (of Snow Patrol).

A taste of Up All Night-era 1D. This song's a bit more edgy, though, and it has a house music-y bit somewhere in there. It's catchy, but not much else.

The 'aaa-woooo' makes me think of this song as the Heart Attack of this album. It's pretty good! I like the harmonising, and think this song would sound a lot different (good different) stripped down. Also, Niall sings a line that goes 'hips don't lie' and it made me laugh.


Why Don't We Go There (deluxe edition bonus track)

Another song that leaves a bad taste in my mouth. It has lyrics like 'I know you want, know you wanna take it slow | Think about all the places we could go | If you give in tonight, just let me set you free' and 'Say the word, say the word, but don't say no'. No, guys. Just no. No.

The guitar riff sounds too much like the one from Jessie's Girl by Rick Springfield for me to concentrate on anything else. I guess some other notable things in this song are Zayn's voice and Liam's falsetto (although those should always be notable things all the time).

I'm a bit amused by but definitely appreciative of the sudden abundance of electric guitar-infused songs. This is so different from their normal stuff, but I quite like it! Louis screaming should be a thing, in my opinion. However, I have this niggling feeling that the tune of the chorus sounds somewhat familiar... If someone figures out what song it sounds like, please let me know!

The guitar at the start made me think of More Than This off their first album. That's a good song (when they do it acoustic), but this one just might be even better. I like this song quite a bit despite them singing 'I'm walking around with just one shoe' to rhyme with 'I'm half a heart without you', because it's a sad song with strings and I'm a giant sap.