One day, my stubbornness and close-mindedness will be the death of me. As it is, I feel like they've caused me to miss out on so many things, simply because I won't give any of those things a chance due to a matter of principle. One example is anything 'hipster' -- I abhor hipsters and their pretentiousness, and won't touch anything to do with them with a ten-foot pole. However, sometimes when I'm feeling adventurous and rebellious (against my own matters of principle), I will give something new a shot. It doesn't always turn out well, but this time it did: my newest discovery is an absolute gem, and it's a band that goes by the name of Bastille.

Wikipedia says they are an alternative rock, indie rock, synthpop band from London.
(Picture from here)


A little backstory: I'd heard of Bastille before, the name of some band, floating around on the Internet. I knew they had a song called Pompeii, which I thought I might check out since it reminded me of that story The Dog of Pompeii (it's a children's story about a blind boy and his dog who lived in Pompeii) (spoiler alert: one of them dies, and it's really sad). However, I never got around to it, and finding out that they were this indie band that my hipster friends loved made me sigh in disgust and not bother. I clearly remember rolling my eyes at two friends on Twitter who were filled with horror at the fact that they'd heard Pompeii being played on the radio.


(Hipster friends, I like you and stuff; it's just the hipster-ness that I can't stand. Love the sinner but not the sin and all that, right?)


Anyway, I decided that I didn't need a hipster indie band in my life. I mean, their band name/logo is actually BΔSTILLE. Really? What was this, the Illuminati? I shook my head at them and carried on with my Bastille-less days. Truly, I didn't know what I was missing.


Then came the fateful day a few weeks ago, when I flew home. The flight from Melbourne was about eight hours long, plenty of time to have a poke around MAS's entertainment system in between short naps. None of the movies really interested me (except The Avengers, but I had to stop halfway because I'd actually really needed to sleep, having stayed up till the wee hours of the morning packing), so I had a look at their music. It was quite an impressive selection, to be honest. Finally, I narrowed it down to two albums: Of Monsters and Men's My Head is an Animal and...yes, Bastille's Bad Blood.


As I recall, My Head is an Animal was pleasant enough, but nothing particularly stood out except for Little Talks, which I'd already heard and liked. Most of the songs were soothing and a little bit melancholy -- good for the end of a long day and, I guess, plane rides. 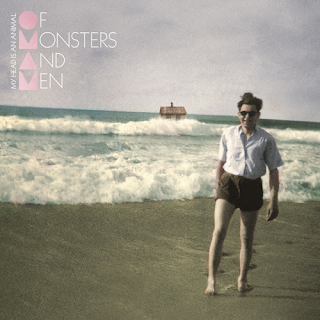 I always thought the person on the album cover was a woman.
(Picture from Last.fm)


Bad Blood, though, that was something else. Pompeii was the very first track, and as I sat there listening, I remember thinking Wow. I'm not sure if it would've had the same effect on the first listen had I been using the crappy headphones MAS gives you, so I'm glad I discovered the trick of sticking in the jack of my own earbuds in a certain way. Anyway, Things We Lost in the Fire was next, and it was so ominous and epic and amazing. Just when I thought maybe general gloominess was this band's signature sound, These Streets and The Weight of Living came on, and I was pretty much sold. (Not that I have anything against general gloominess; it's just that some variety is always nice.)


When I got home, I downloaded Bad Blood (The Extended Cut) and the songs from All This Bad Blood that the first one didn't already have. I haven't been listening to much of anything else since.


Of course, when you massively get into a band, one of the things you do is YouTube every song they've ever done. Prior to this, I'd thought that I couldn't possibly love them more than I already did; I was proven wrong. Bastille/Dan Smith (frontman, songwriter, source of Bastille's musical awesomeness) has a knack of doing covers and mashups, and making them completely their/his own. The best example of this is their cover of Miley Cyrus's We Can't Stop (with a surprise bridge).

Recently, they released a new single, Of the Night. It's a mashup of Rhythm is a Dancer by Snap! and Rhythm of the Night by Corona (I'm not sure why they didn't have 'rhythm' in the mashup title since both song titles have that word in common). I'd heard the former but not the latter, but Of the Night sounded vaguely familiar nonetheless; I didn't much like it at first, but it's really grown on me. The other day, I went to listen to the original Rhythm of the Night, and my mind was blown. They basically took two dance hits and turned them into a dark, almost gentle...tune.


Another cover most definitely worth mentioning is What Would You Do, originally by City High. It's a sad song, told from the point of view of this guy who runs into an ex-schoolmate working as a stripper at a party; he asks her what happened and she replies "What would you do if your son was at home, crying all alone on the bedroom floor 'cause he's hungry | And the only way to feed him is to sleep with a man for a little bit of money?". It goes on in this vein, and Bastille's cover is really quite haunting. (Side note: I think Ed Sheeran would do a brilliant cover of this song.) I went to check out the original version the other day, and I was shocked. I don't really know what I was expecting, but certainly not an almost cheerful-sounding song with guy rap-singing the verses and a girl clad in classic 90s getup, singing the chorus and dancing. It was the same song, but it wasn't. Mad respect to Bastille for so artfully reworking songs the way they do.

That's not to say I think everything they do is gold. They did a cover of David Guetta's Titanium, and I kind of really hate it. Maybe it's because I'm so used to the original, but their cover sounds so strange and disjointed to me. Listening to it all the way through took a bit of willpower, to tell you the truth. I guess covers are really a hit-or-miss thing.


So, to conclude this fairly lengthy post, I am now a convert and a fan of this (previously?) hipster, indie band. They're going to Australia next year, but not to Tassie because nobody goes to Tassie and I am highly upset. Oh well. For now, they'll just remain uncrossed on my List of Artistes I Want to See Live. 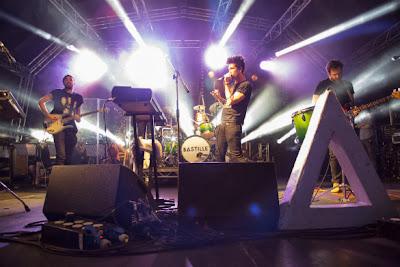 One day, Bastille. One day.
(Picture from Entertainment Wise)


(If they come to Malaysia when I'm back in Tassie, I might actually weep.)

Email ThisBlogThis!Share to TwitterShare to FacebookShare to Pinterest
Labels: music, self