So we first years have survived our first summative exam.


Summative anything (exams, essays, presentations) counts towards our final mark, so it's not something to be pooh-poohed. That's debatable in this case, however, since the exam was only worth five percent. Five percent! All that stress and mugging for five percent! Less, actually! Approaching exam day, there was an internal battle in my head between 'It's okay. Give up. It's five percent. Do better next time. Go to sleep.' and 'Are you freaking kidding me you've been in med school for all of six weeks omg this is your first summative exam and there is relatively little to study hello you are supposed to do well for this!!!'. I've been sleeping very little for the past week, so you can probably guess which side won. 
The paper, as Calvin put it, was 'passable' ('probably won't fail' as opposed to 'acceptable'). Praise the Lord for MCQs. What's not to love about MCQs? Even if you have completely no clue, you just shade a circle and you've got a 1/5 chance of getting a mark. Win! The short-answer questions (SAQs) were hard, though. Histo was particularly so, but then again, that might be my own fault since I do not like Histo. (Seriously, though. Non-membranous organelles? What?) Theme 4 was just ugh. That's not an adjective, but that was what it was, so there. Lucky, the SAQs had some pretty salvageable parts, so I'm pretty sure I'll pass.


(Can I just say right now that I hate how uni is forcing me to lower my expectations? I mean, sure, I could still be aiming for the highest grade, but I imagine that would be demoralising and extremely stressful. Aiming high is great and all that, but you have to be realistic and know your own limitations as well. I may or may not be a HD student if I studied like crazy, but would the grades be worth the effort? Do I really want to burn out? I've been told to just aim to pass, but can't quite bring myself to do that just yet. This will probably change as the years go by, though. End idealistic mini rant.)


After the exam, we decided to celebrate by not eating at the cafeteria; instead, we went to Noodle Bento. I got a $10 noodle thing and tried not to think about the fact that I was paying RM32 for noodles. To be fair, it was huge, and I got maybe halfway through it before surrendering the rest to some of the guys. It was just alright, though, nothing special. Oh man, what I wouldn't do for RM5-6 wan tan mee or chilli pan mee... 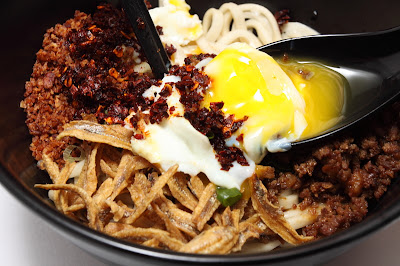 
Speaking of food, a few of us were at Woolies the other day because Tiffany and Isaac wanted chocolate to keep them awake for late-night study sessions. There, I saw something that made my entire...I don't know, month? A seeing-eye dog! It was an old, longsuffering-looking labrador retriever that padded along the aisles, sniffing at packaged biscuits on the lower shelves in a mildly interested sort of way. It was so cute and I wanted to throw my arms around it, but thought that might be a tad too much and instead contented myself with making happy squeaky noises as it went by. It was really cute. Sigh. I miss my dogs.


In other news, tomorrow I will be playing badminton in Hobart for the first time with the OCF (Overseas Christian Fellowship) people, so that should be fun. It's been ages since I last played! (You're supposed to hold the racquet at the oval net part, right?) Also, there's a Jane field trip of sorts to the Mount Pleasant observatory that I'll be going for in the afternoon. Busy weekend -- a rarity for a hermit like me. I'd better get some rest, then, seeing as how it's currently three in the morning. I was supposed to sleep early too. Oops.