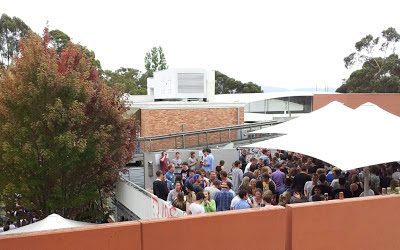 
1. Got an issue w/ others' spit? Forget it!
Your food/drink is my food/drink, and vice-versa. Spit sharing most commonly occurs during the sharing of drinks, though, when numerous people drink from the same cup/bottle. This happens a lot when drinks are of the alcoholic nature.

2. Priva-what?
Back home, my room was a sacred place where no one but myself (or whichever family member was cleaning the house) was allowed to enter. However, that isn't the case here; having friends come over to hang out is a common practice, one that I've found myself taking up occasionally as well. (They're still not allowed to sit on my bed when my quilt isn't covering it, though.)

4. Strength in numbers
If there aren't very many people waiting outside the meeting room, you are all probably at the wrong meeting room. Everyone else is probably at the other meeting room in that new building that you didn't even know had been opened because construction is still going on.

5. Herd mentality isn't always bad
When unsure of what to do, make sure everyone does the same thing. That way, if it's wrong, you're all screwed together.


Not a bad list, I'd say, after having had only two weeks of classes so far. Granted, the first two are more about living in a hall of residence than about uni, but oh well. It's nearly six, so my mind is on my dinner.

Email ThisBlogThis!Share to TwitterShare to FacebookShare to Pinterest
Labels: uni