Hello from Hobart! It’s been forever, pretty much, since I last posted, but that’s due to my being crazy busy rather than procrastination (yes, really). I’m settling down quite nicely, getting used to the weather and such. It’s quite nice. Things are pretty different here, though. For example, did you know that Woolworth’s has self check-out lanes? And not only that: you can withdraw cash while paying at said self check-out lanes! Woah!


(I know, I know. But nothing beats the swaku-ness of me freaking out – in a good way, of course – when I walked by some apple trees on the street.) (Apples! Actual apples! Just growing there by the side of the road like that! Apples!)

I also can't stop taking photos. The view on the way to the dining hall.


Something else that took some getting used to was the communal showers and bathrooms at Jane, my hall of residence. It was just really kind of awkward, the first time I came out of a stall to find a guy waiting to go in. And just when I thought I had gotten used to all this stuff, I went for Medcamp, where even the cabin arrangements were mixed-sex. When you come from a country where guys and girls aren’t even allowed on the same escalators in some states, this is a pretty massive change.


But, y’know, change was to be expected. I didn’t come all the way here to experience the same culture and customs as back home.


I do miss home, though. My family. My friends. My dogs. My house. My room. My good Internet connection. The little things.

Rather accurate.
(From here)


Oh, and the food! I misread ‘root canal’ as ‘roti canai’ a few days back. It gets pretty cold here some days (even though it’s kind of more or less still summer), and on a particularly cold day, Cecilia and I were bemoaning the unavailability of kimchi jigae and steamboat. The best steamboat I ever had was at Cameron Highlands; I bet if I had one here, it would be even better.


The food at Jane is pretty good, though. A few nights back, they had this vegetarian risotto that looked disgusting but tasted amazing. Amazing! (I went back for seconds.) It took me a few days to realise that dessert is available at the far end of the dining hall, and when I found out that there’s Bulla ice cream every night, well… I knew I wouldn’t be losing any weight from all the walking.


Oh, walking. I enjoy walking. I do. The weather here is generally nice for walking too, since it’s summer-bordering-on-autumn; the air is crisp and cool, and it gets a bit chilly when the wind blows, but the sun warms you up when it’s out. The issue I have, though, is the hills. Here’s a good indication as to how hilly Hobart is: My building, Aldridge, has exits on either end. You can enter through one from the ground floor outside, run down two flights of stairs, exit through the other side…and still be on the ground floor outside. So, yes, walking gets pretty intense. 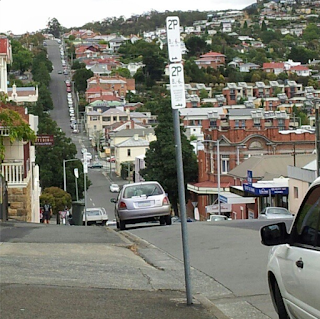 And you thought the slope test at your driving school was bad.


But it’s not horrible, though! I mean, while walking back to Jane today after a shopping spree at town, I did tell Olive to inform my family if I died on the way there and that she could have my room, but, you know, I’ve always had a bit of a melodramatic streak. It made her laugh; she was subsequently unable to walk until she had calmed down.


So things are pretty okay here. Forced myself out of my hermit shell and made friends. Downloading lecture slides all the time to be read in preparation for the next day’s classes. No textbooks yet, but that will hopefully be resolved soon. Got a decent stock of granola, granola bars, and coffee. It’s a lovely, cool night. The weekend is here. All is right in the world.

Email ThisBlogThis!Share to TwitterShare to FacebookShare to Pinterest
Labels: uni