I have a horrible habit of buying books at book sales and not reading them. Previously, I told myself I just didn’t have the time (though I did have the time to go to more book sales and buy more books), but now that I do have the time, I realise that the problem is most probably my love of rereading favourite books. This problem is exacerbated by the fact that there are a number of books I really like, and so I have no problem settling on one for a cozy reread. 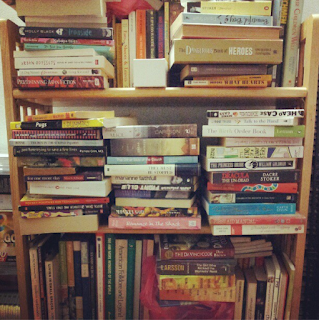 This is our mini library.


However, I am leaving for Tasmania soon and unfortunately can’t bring all these books with me. I’ve stopped buying books and am now faced with the task of reading all these untouched books before I leave. Previously, I’d thought this task gargantuan, but now I realise it really isn’t. I’m a pretty fast reader, and I’ve got about two months to go, so I should be able to get through them all.


Here is a list of the books (both from book sales and not) I had/have to get through:


It’s interesting to note that all but two of those are non-fiction. I remember, when I was in my mid-teens, my Grandad told me I had to start moving from fiction to non-fiction, and I was mildly annoyed. Reading, I felt, was a good trait in itself, no matter what you read. I was more or less happily ensconced in the Young Adult genre and wasn’t going to budge. Well, the above list contains non-fiction books on topics like child abuse, ADD, Christianity, psychology, and depression. I hope you’re pleased with this, Grandad. I know I am! 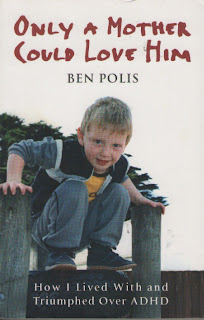 This was pretty enlightening.
(From here)


You may feel that this list isn't really very long, and I agree with you. In actual fact, there are more books that I haven't read, but they are of the why-did-I-even-get-this variety. In the interest of time (and because I am lazy), I decided not to include them...so I would have time to reread books! Yay!

There's more, but I don't want to nose around our bookshelf and tempt myself too much yet. Also, there are some books (The Bell Jar by Sylvia Plath, Norwegian Wood by Haruki Murakami) that I purposely am not including because they depress me to no end. I want to reread The Chronicles of Narnia series, but that would require lots and lots of long blocks of free time; when you're so immersed in stories of Narnia, you don't quite come back to earth when you have to put the book down. That happened to me when I had my Harry Potter rerereadathon too (except, you know, Hogwarts rather than Narnia).

I'd like to end this post by talking about my rerereadathon for a bit, because I'm really proud. Since my SPM days, I told myself that I would rereread the entire Harry Potter series, one book after the other, non-stop. Every time a long-ish holiday rolled around, I told myself I would get down to it, but it never happened. However, I finally, finally did it a while ago. All seven books. One after the other. Non-stop. It was great. 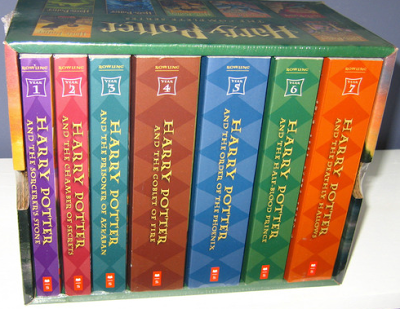 Not my boxset, but look at the colours!
(From here)

There are drawbacks, though, when you throw yourself into something for prolonged periods of time. Starting the sixth book before giving myself time to recover from the emotional trauma inflicted by the fifth book was hard. Also, one time, I was surveying all the washing up I had to do, and found myself thinking I have to do all this! Without magic! It's always a sad moment when Potterheads remember that they can't do magic. Sigh.

Okay, I'm done nerding out. Books are great, reading is fun, and you are all probably mildly horrified and amused at my bibliophilia. Oh well. Time to go read more books!

Email ThisBlogThis!Share to TwitterShare to FacebookShare to Pinterest
Labels: books