Hello. I'm here to talk about One Direction again. 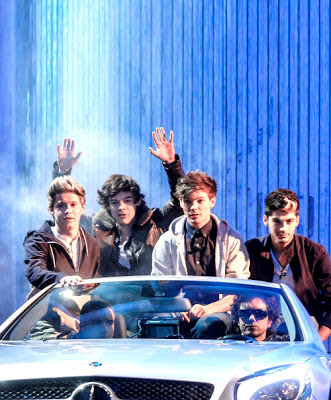 Liam is riding shotgun. Look at his face, I can't stop laughing.
(From this Tumblr)


You might remember this post of mine, in which I complained about how horrible Live While We're Young is. (Keep in mind, please, that I was talking about the song. I enjoy the video very much because it's five stupid, cute boys being stupid and cute. Also, it's very colourful.) I ended the post with this sentence: 'There had better be several More Than This-like songs on the new album to make up for this.' Well, the video for Little Things came out recently, and it looks like I might be getting what I wanted.


Little Things is quiet and sweet, with (possibly the best part of all) no detectable autotune. It's just them and some guitars, each of them gets solos, the harmonising is good, and it's just all-around lovely. The idea of the song is that there are all these little things that this girl (I think it's safe to assume that it's a girl) doesn't like about herself, but they only make 1D love her all the more. Someone online said that Little Things is like What Makes You Beautiful's more mature older sibling, and I agree; both songs seek to boost the girl's self-esteem, but Little Things does it in a more refined way.

If you, after having read the title of this post, are wondering what Ed Sheeran has to do with any of this, well, he penned Little Things. I'm a fan of Ed, and just by listening to the song, I think it's obvious that he wrote it -- it's got his mark, it's his style. Many of his songs, especially the earlier ones, are very 'barebones', just him and a guitar. I love how whoever was in charge decided to have 1D perform it the way Ed had written it, it sounds so much more intimate and honest.


In contrast to this, there is Moments. Moments is another penned-by-Ed Sheeran-performed-by-1D song, off the souvenir edition of their debut album, Up All Night. Ed says he wrote it when he was seventeen, which is incredible because I do not personally know any seventeen-year-olds who can write songs as great as this one (or even write songs at all). I'm going to assume he wrote it in his signature 'barebones' style, because that was how he performed it when someone asked him to on UStream. 1D, however, turned it into this soaring, epic sort of ballad...which I liked anyway.


I am directing you to a live version of Moments because it is my absolute favourite and it is proof that they can sing live. I regret to inform you that there's only audio because the performance videos of the iTunes festival that people managed to steal from iTunes got removed by YouTube. However, rest assured that this really was from the iTunes festival; I know this for a fact because I watched their roughly hour and a half-long set.


I have some happy news: there is another song from the upcoming album that was written by Ed Sheeran. It's called Over Again, and needless to say, I am excited to hear it. I have a horrible feeling it's going to be a sad song, though ('over again' as in 'broken up again'), but I know it's going to be good. I love Ed, and his songwriting skills haven't let me down yet.