It's half past one in the morning and I am very tired, but I've just heard One Direction's new single and have something to say:


If you haven't heard it yet, here is the official music video. Don't let the cute boys and bright colours distract you. Actually listen to it.

So it starts off innocently enough, with a cheerful (if somewhat jarring) guitar riff. "Hey girl I’m waiting on ya, I’m waiting on ya," sings Liam. Aww, how cute. He's waiting for this girl, and he sounds happy and not pissed off or heartbroken. What comes next? Is he waiting for her to notice him or something? No, as it turns out -- "Come on and let me sneak you out."


Oh. Um, okay. Okay, fine, he wants to drive around with "the music up, the windows down". Alright, that's cool. In fact, they'll actually be pretending that they're cool and keep doing what they do. Okay. Sounds all right so far, right? Right. And then the chorus kicks in:

Let’s go crazy, crazy, crazy till we see the sun
I know we only met but let’s pretend it’s love
And never, never, never stop for anyone
Tonight let’s get some
And live while we’re young


One Direction is, as my mother puts it, a 'teeniebopper group'. Consider, please, the average age of their fanbase and read the above lyrics again. Is this really appropriate? 'I know we only met but let's pretend it's love'? 'Tonight let's get some, and live while we're young'? What the heck is this? I probably sound like a mom right now, but what kinds of values are they promoting? And among a fanbase comprising a large number of tweens! 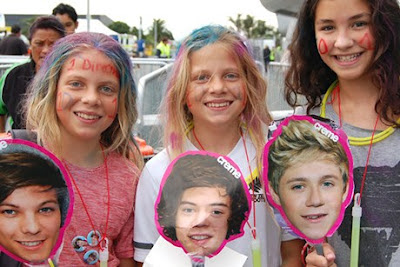 How old do you reckon they are?
(From 3 News)


Just when I think it couldn't get any worse, Zayn swaggers up to the camera with the new blonde streak in his hair reminiscent of Michael Aranda's. Giving us his long-perfected smouldering look, he sings the following verse:


By now, I am just screaming in my head, and all the bright colours only make everything worse.


That's pretty much the entire song, apart from the bridge where Zayn and a girl "are 'bout to make some memories tonight" and Louis wants to live while he's young. Nothing more, because, y'know, catchy songs are all about repetition.

Live While We're Young, though, is not.


I'm positive that they were presented with a plethora of catchy songs to choose from for the new album -- they're huge now, so many songwriters would be eager to sell them their songs. And so, out of that plethora, one of the songs selected was...this one? This one, about mindless sex with a near stranger, complete with racy pictures to document the night's activities? Really? Really?!


The title track off 1D's first album, Up All Night, has a lyric that goes thusly: I wanna stay up all night and find a girl and tell her she's the one. That lyric has always bothered me, but at least that song was never a single. However, Live While We're Young (which has taken that sentiment to a whole new level...or perhaps just been more clear about it), is. Not only that, it is the first single off their new album. Part of me shudders at the thought of what the rest of the album's going to sound like.


In my opinion, Live While We're Young is a really stupid song. I am not a happy fan. Boo, management. Boo, 1D (if y'all were actually involved a lot in the song selection process). There had better be several More Than This-like songs on the new album to make up for this.
Posted by Hui Jan at 4:48 AM