I don't watch sports. I just don't. I've never understood people who go to mamaks and scream at tiny football players running around the field on TV. It boggles my mind that people would sit for ages watching golf, listening to the droning of the commentator (who sounded bored himself). I saw a bit of hockey on the YouTube livestream the other day and thought they looked ridiculous. I guess I just don't get sports, and therefore, I don't watch it.


However, when your country has a shot at winning a gold medal in badminton in the Olympics, you tend to make exceptions.

Lee Chong Wei vs Lin Dan, for the second Olympics in a row


Four years ago, my family and I sat at attention in front of the TV to watch the epic Lin Dan vs Lee Chong Wei showdown. It didn't turn out as epic as we thought it'd be, and we grew increasingly disappointed. From what I remember, Chong Wei seemed to get more and more unnerved by Lin Dan's skills, and kept hitting the shuttlecock into the net. We brought home the silver that year (the gold going to China, of course), and I was left thoroughly unimpressed. That was what everyone had been so excited to watch? Bah.


This round, I made an exception again, and the four of us again sat at attention in front of the same TV (we're the only family I know of that still has that boxy kind and not a flat screen one). And this time, it was different. This time, we were all on the edge of our seats. This time, it was good. 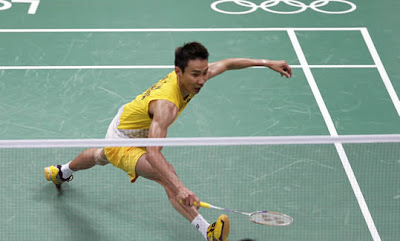 Chong Wei going in for a drop shot.
(From here)


That's not to say Lin Dan wasn't good, though -- he was still amazing. Did you see that save in the first set, followed by a jaw-dropping smash? Incredible. Lin Dan's smashes are downright scary; you see him jump, see his face contort, and you know his opponent's screwed. But several times, this wasn't the case! Chong Wei made many admirable saves, astounding us during those sure-die-wan moments. The guy doesn't do smashes, but his defence is pretty freaking awesome.


Chong Wei brought home the silver. In my opinion, this is the vein all headlines should be in, not 'he lost' or 'only silver' or 'fails to bring home Olympic gold' (looking at you, @malaysiakini). Chong Wei brought home the silver medal -- our only medal so far -- and has certainly made a name for us in the international sports scene. There is no shame in losing to a player like Lin Dan, and lose though he did, he put up one heck of a fight. I think I speak for most Malaysians when I say that we are very proud of him.


Despite all this, here's what Chong Wei tweeted minutes after the match:


I literally wailed when I saw it. Watching him sink dejectedly to his knees while Lin Dan's coaches smothered the latter in hugs had been painful enough. Noticing him swiping tears from his eyes before accepting his silver medal had been worse. This just... This just really took the cake. On the bright side, it wasn't long before the good people of Twitter started yelling at him for apologising, saying that they were proud of him for his achievement and for uniting the nation. I hope he read all that. I really do.


Congratulations, Dato' Lee Chong Wei! Yours is the only medal Malaysia has gotten so far in these Olympics; that's definitely something to be proud of, whatever the colour. You did good, and we're proud of you. There is no need for tears, and even less need for any sort of apology, so don't! Thankyou for all the blood, sweat, and tears; for putting Malaysia on the map; and for your remarkable humility. We are all very proud of you.


You may have gotten the silver, but you are gold in my eyes.
Posted by Hui Jan at 5:26 AM